Have you ever wondered why some people don’t do what they’re supposed to do? When this happens, the first question I always ask is ‘Did they know what was expected’? The answer I often hear is ‘Well, they should have known.’ Maybe, but that doesn’t change the result. 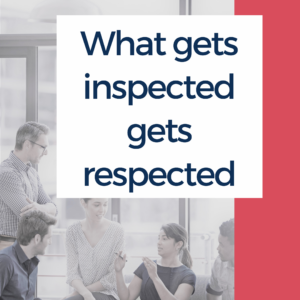 Not having clear performance measures is the number one reason that people don’t do what they’re supposed to do. They simply don’t know what’s expected. In fact, according to a Gallup survey, only 50% of employees clearly know what’s expected of them on a daily basis.

In addition to helping people succeed in their jobs, providing clear expectations leads to:

No one can meet a standard that hasn’t been explicitly stated, but many individuals are motivated to meet or exceed a measure that has been set.

Steel magnate Andrew Carnegie found this to be true. When visiting one of his production plants, he wrote on the floor in chalk the number of units the day crew had produced. The next day found that the night crew had erased the day crew’s number and replaced it with an even bigger number.

The night crew knew what the measure was and they exceeded it. Pride is a mighty motivator.

Achieving more than what seems impossible

Why do professional athletes keep breaking records? Because they can. When an impossible goal has been achieved it inspires them to think about what else is possible.

The current world marathon record for men is 2:01:39, set in 2018. That time would have seemed impossible in 1896 but over the years it became more attainable as records were broken incrementally.

When someone isn’t doing what they are supposed to be doing some managers are try to ignore and hope it improves on their own because they want to avoid conflict.

Performance issues never improve on their own, they have to be addressed.

When you communicate expectations before there is a problem it’s easier to address a situation before it gets out of hand.

“I noticed you completed your work at 2pm yesterday but you didn’t ask your co-workers if they needed any help. What’s going on?”

If you get any push back, you simply say, “Remember that in our department we agreed to help out our co-workers. Can I count on you to help out?”

So, what should you measure?

Choose critical job tasks that lead to bottom line results. When you’re thinking about what to measure think about PQT – Productivity; Quality; and Time.

The key is to define the expectation in black and white so there is no room for ambiguity. For example, let’s say you manage a data entry team. Instead of a vague reminder that all forms need to be filled out completely, provide a specific accuracy measure.

One company improved their order entry accuracy rate from 65% to 99% with this process. The low accuracy rate was a result of the team leaving a field on the order form blank. They weren’t being lazy they just didn’t understand why it mattered.

Defining the quality expectation resulted in a reduction in the number of customer complaints; increased the speed in which payments were received; and eliminated inter-departmental conflict that was being caused by data missing from one field.

The results came from following a proven system:

If there are no measures there is nothing to communicate, nothing to give feedback on, and nothing for people to strive for. When you define, document, and communicate performance expectations you create a strong culture where everyone is on the same page and that creates success!

For more details on setting expectations, check out Communicate Like a Boss: Every Day Leadership Skills That Produce Real Results.