The cycle of chaos can be defined as a recurring issue that disrupts the workplace and comes to a boiling point followed by the illusion of change and then regression.

The cycle of chaos is exhausting. Not only that, it creates a lot of collateral damage in the form of complacency; turnover; stress; low morale; and mistakes.  If it goes on too long, it results in a negative workplace culture. 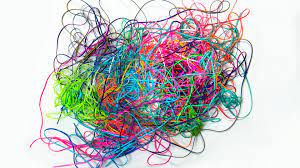 You could be in the midst of the cycle of chaos and not even realize it. You’re busy. You have a lot going on and you’re trying to juggle a lot of balls. You want a quick solution to whatever problem you’re dealing with so you can move on. I totally get it. But if you don’t step back to deal with the real issue you will be dealing with it again. And again. And again.

That’s exactly why it’s so important to step back and recognize the cycle of chaos so you can find a permanent solution to the problem. It will save you time in the long run.

There are four stages in the cycle of chaos:

Stage 1: An issue emerges out of nowhere

Everything seems to be going smoothly when out of the blue an issue pops up. It might start gradually. You being to hear some murmurs around the water cooler. It looks like the team is getting along but one day an employee stops in to complain about something another employee is doing or not doing. Or, a manager from another department wants to meet with you about an issue caused by your department. Or, you find out that your manager has been involved in higher-level management meetings concerning your area.

You think to yourself, “Oh great. Here we go again.” You try to ignore it or gloss over it but it doesn’t go away.

If these issues are overlooked, pressure builds. Complaints get louder. Frustrations grow. Tempers flare and patience evaporates. Meetings are scheduled to talk about the issue and remind everyone about policies and procedures.

At this stage you start looking for ways to Make. It. Stop. This could include disciplinary action, more meetings, or email reminders about policies and procedures. It often includes telling people what to do but not training them on how to do it.

The performance improvement plans and the reminders work – at least right now. The chaos subsides and you feel the relief.

The temporary fix is deceiving. It removes the acute symptoms so it gives the impression that the problem has been resolved once and for all. Unfortunately, it’s like taking an aspirin for chronic headaches. You’ll get some immediate relief but eventually it wears off and you are back to where you started.

Have you ever noticed how some people revert back to their old ways as soon as their PIP expires? Or that as soon as the manager turns their attention to some other matter, the process related issues start to creep up again?

Habits are hard to break. Because the temporary fixes are aimed at relieving a symptom, they only work for a short time before the issue begins to emerge again and you have re-entered the cycle of chaos.

You’ve recognized the cycle of chaos. Now what?

ldentify the real problem. The 80/20 rule is a great place start. Workplace issues generally fall into people problems or process problems. Identify the 20% of people or processes that are taking up 80% of your time.

Who are you spending the most time coaching? What issue is taking up 80% of your resources? Review your calendar and your meeting agendas. Is there a topic that keeps coming up week after week in your staff meetings? How many one-off meetings have been scheduled to focus on a specific issue? Meetings are one of the biggest drains on your resources.

A “problem employee” is usually a symptom, not the real issue. They are the result of unclear roles and responsibilities; unclear job expectations; lack of training; lack of procedures; or poor culture fit.

The same is true for most process-related problems. Are you noticing a trend in complaints from customers, employees, or other departments? In most cases you will find that it’s a simple matter of an unclear or lacking standard operating procedure.

Once you pinpoint the real issue, you can take steps to solve it once and for all and you will have more time to focus your attention and resources into finding ways to innovate.

Liz Uram works with leaders to equip them with the skills they need to get better results, make a bigger impact, and be a positive influence on others.

Recognizing the Cycle of Chaos