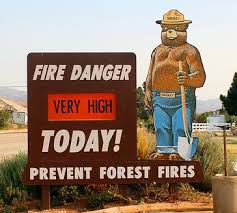 Unless you work for the fire department the majority of your work day should not be spent fighting fires.  Take a clue from Smokey The Bear.  He says only you can prevent forest fires, not only you can fight forest fires.  Prevention is your best protection against firefighting. Unfortunately, many people have it all backwards. They spend most of their day in crisis mode and less of their time in prevention and maintenance mode.

In 7 Habits of Highly Successful People, Stephen Covey uses the four quadrant time matrix to help us identify where we spend our time and shows how spending more of our time in the important but not urgent quadrant helps keep us out of crisis, or firefighting, mode. Some of the main reasons people end up in the important and urgent (crisis) quadrant in the workplace is that processes, procedures, training, and work standards are lacking.  Once you get stuck on the merry-go-round of inefficiency, it is difficult to get away from the cycle of reactive behavior long enough to put processes in place.  So, what do you do if you find yourself do the work of a firefighter?

The fastest way to move forward is to stop.  You cannot put preventive, proactive measures in place while you are in the midst of fighting fires.

A financial advisor was struggling under the weight of the necessary daily tasks of emails, phone calls, client files, etc.  Because she was fighting just to keep the normal tasks at bay she was consistently the lowest producer on the team. When her manager met with her to have the coaching conversation about what she needed to do to improve her performance it became clear that the problem was a lack of a systems for handling these daily tasks.  Up until this point the remedies had been temporary fixes that alleviated the symptoms for a short time but the underlying issue, the lack of a system, was never addressed and the problems persisted.

The solution was to just stop. Stop the whirlwind of inefficient activity long enough to get to the bottom of what was causing the problem. This created a bit of angst for the financial advisor initially because she was already struggling to meet minimum sales requirements but the manager assured her she would not be penalized for performance while she worked on getting her systems in order.  She was taken off the phones and someone on the team who was very efficient spent some time with her to analyze her workflow.

Once the gaps were identified, they were able to come up with a better system for handling emails, calls, and files going forward and get her backlog in order. In reality, it only took a couple of days but those couple of days of lost productivity were quickly made up using the new system.  Her performance improved immediately and she moved from the bottom of the pack to near the middle in a short time.

I encounter significant resistance from people when I suggest they stop what they are doing long enough to get a grip on their day. They are so busy twirling around on the merry-go-round they can’t possibly believe there is any other way. My question to them is this, if your head is already spinning and your days are out of control because you are fighting fires all day, what’s the worst thing that could happen?  Just give it a try. You might be surprised to find out how well prevention works.

Take a clue from Smokey The Bear
Tagged on: priorities    time management