Have you ever worked for a leader you didn’t respect? If you have, then you know how hard it can be to stay motivated.

When it comes to developing leadership excellence, earning respect is key 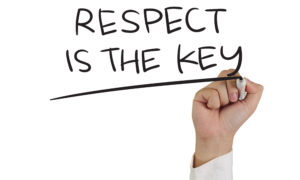 because of the negative impacts it has on the team. A leader who loses the respect of their team is probably battling high turnover, low productivity, poor quality, low morale, and apathy.

Respect isn’t about being liked or being popular. It doesn’t automatically come with the job title. It can’t be bought or forced. It can be lost in an instant and can take years to earn.

The hard thing is that most leaders don’t even realize that they’ve lost the respect of the team. It’s one of those things that hovers below the surface and rarely gets addressed.

Here are 10 signs that a leader doesn’t have the respect of the team:

1. People don’t follow through on what they said they would do
2. People seldom ask for your opinion or advice
3. People stop talking when you come around
4. You get silence when you ask your team for input in meetings
5. No one ever disagrees with you
6. Employees skip you and go straight to your boss
7. Your team doesn’t share updates
8. People limit their interactions with you to the bare minimum required
9. Communication is brief
10. High turnover

Okay, time for an honest self-appraisal. How many of those signs can you relate to? Look for patterns. One instance, or one person, does not make a pattern. However, if you notice multiple people acting this way toward you for a period of time you could have a problem.

If you think you have lost the respect of the team, hope is not lost. The only time a leader is hopeless is when they refuse to look in the mirror. Respect can be earned back but only if you know what happened to lose respect in the first place. You cannot demand that people respect you, it must be earned.

Here are the top 5 responses I get to the question ‘How do leaders lose respect?’:

Would any leader do any of these things deliberately? Of course not. But the path to poor leadership is paved with good intentions and deliberate or not the result is the same. No respect. And the downward spiral begins.

So, what can you do? Check in with yourself from often and ask yourself if you’ve done something to cause the problem. Be open with your team if you messed up. Their esteem of you will rise immediately; as long as you don’t make a habit of messing up. If you notice something is off, do your best to repair the situation. Honest attempts to improve as a leader are signs of humility and most people respect a humble leader.

Liz Uram is a leadership skills expert who works with companies to equip their management team with the skills they need to succeed.

Respect is the Key to High-performing Teams